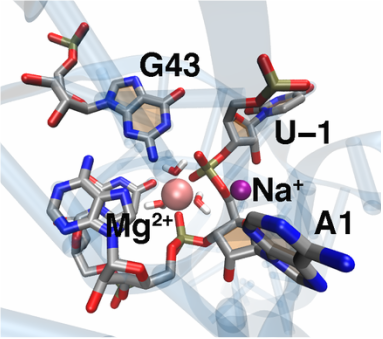 Molecular Dynamics Study of Twister Ribozyme: Role of Mg2+ Ions and the Hydrogen-Bonding Network in the Active Site
The recently discovered twister ribozyme is thought to utilize general acid–base catalysis in its self-cleavage mechanism, but the roles of nucleobases and metal ions in the mechanism are unclear. Herein, molecular dynamics simulations of the env22 twister ribozyme are performed to elucidate the structural and equilibrium dynamical properties, as well as to examine the role of Mg2+ ions and possible candidates for the general base and acid in the self-cleavage mechanism. The active site region and the ends of the pseudoknots were found to be less mobile than other regions of the ribozyme, most likely providing structural stability and possibly facilitating catalysis. A purported catalytic Mg2+ ion and the closest neighboring Mg2+ ion remained chelated and relatively immobile throughout the microsecond trajectories, although removal of these Mg2+ ions did not lead to any significant changes in the structure or equilibrium motions of the ribozyme on the microsecond time scale. In addition, a third metal ion, a Na+ ion remained close to A1(O5′), the leaving group atom, during the majority of the microsecond trajectories, suggesting that it might stabilize the negative charge on A1(O5′) during self-cleavage. The locations of these cations and their interactions with key nucleotides in the active site suggest that they may be catalytically relevant. The P1 stem is partially melted at its top and bottom in the crystal structure and further unwinds in the trajectories. The simulations also revealed an interconnected network comprised of hydrogen-bonding and π-stacking interactions that create a relatively rigid network around the self-cleavage site. The nucleotides involved in this network are among the highly conserved nucleotides in twister ribozymes, suggesting that this interaction network may be important to structure and function.
DOI: 10.1021/acs.biochem.6b00203
Powered by