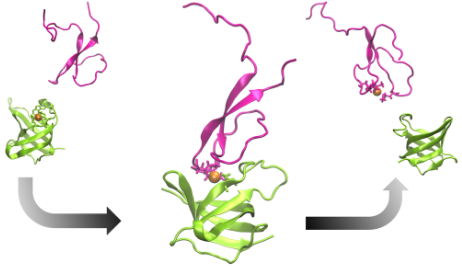 Models for the Metal Transfer Complex of the N-terminal Region of CusB and CusF
The tripartite CusCFBA pump in Escherichia coli is a very effective heavy metal extrusion system specific for Cu(I) and Ag(I). The N-terminal region of the membrane fusion protein CusB (CusB-NT) is highly disordered and, hence, experimentally characterizing its structure is challenging. In a previous study, this disorder was confirmed with molecular dynamics simulations although some key structural elements were determined. It was experimentally shown that CusB-NT is fully functional in transferring the metal from the metallochaperone CusF. In this study, we docked these two entities together and formed two representative metal coordination modes, which consist of residues from both proteins. In this way we created two potential CusB-NT/CusF complexes which share coordination of Cu(I) and thereby represent structural models for the metal transfer process. Each model complex was simulated for 4 µs. The previously observed structural disorder in CusB-NT disappeared upon complexation with CusF. The only differences between the two models occurred in the M21-M36 loop region of CusB-NT and the open flap of CusF: we observed the model with two CusB-NT methionine residues and a CusF methionine as the metal coordination site (termed “MMM”) to be more stable than the model with a CusB-NT methionine, a CusF methionine, and a CusF histidine ligating the metal (termed “MMH”). The observed stability of the MMM model was probed for an additional 2 µs, yielding a total simulation time of 6 µs. We hypothesize that both MMM and MMH configurations might take part in the metal exchange process where the MMH configuration would show up first and would be followed by the MMM configuration. Given the experimental finding of comparable binding affinities of CusB-NT and CusF, the increased stability of the MMM configuration might be a determinant for the transfer from CusF to CusB-NT. The metal would be transferred from the more CusF-dominated metal binding environment (MMH model) to a more CusB-dominated one (MMM model) where the coordination environment is more stable. From the MMM model, the metal ion would ultimately be coordinated by the CusB methionines only, which would complete the Cu(I) transfer process.
DOI: 10.1021/acs.biochem.5b00195 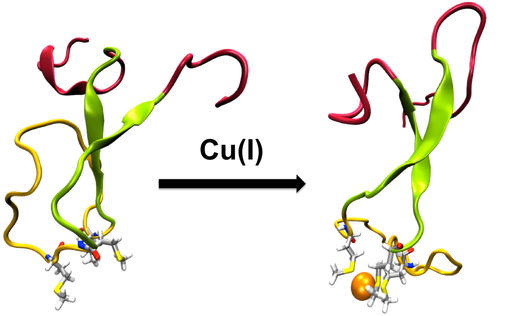 The N-terminal Region of the Cu(I)-binding Protein CusB
CusCFBA is one of the metal efflux systems in Escherichia coli that is highly specific for its substrates, Cu(I) and Ag(I). It serves to protect the bacteria in environments that have lethal concentrations of these metals. The membrane fusion protein CusB is the periplasmic piece of CusCFBA, which has not been fully characterized by crystallography because of its extremely disordered N-terminal region. This region has both structural and functional importance because it has been experimentally proven to transfer the metal by itself from the metallochaperone CusF and to induce a structural change in the rest of CusB to increase Cu(I)/Ag(I) resistance. Understanding metal uptake from the periplasm is critical to gain insight into the mechanism of the whole CusCFBA pump, which makes resolving a structure for the N-terminal region necessary because it contains the metal binding site. We ran extensive molecular dynamics simulations to reveal the structural and dynamic properties of both the apo and Cu(I)-bound versions of the CusB N-terminal region. In contrast to its functional companion CusF, Cu(I) binding to the N-terminus of CusB causes only a slight, local stabilization around the metal site. The trajectories were analyzed in detail, revealing extensive structural disorder in both the apo and holo forms of the protein. CusB was further analyzed by breaking the protein up into three subdomains according to the extent of the observed disorder: the N- and C-terminal tails, the central beta strand motif, and the M21–M36 loop connecting the two metal-coordinating methionine residues. Most of the observed disorder was traced back to the tail regions, leading us to hypothesize that the latter two subdomains (residues 13–45) may form a functionally competent metal-binding domain because the tail regions appear to play no role in metal binding.
DOI: 10.1021/bi400606b
Powered by