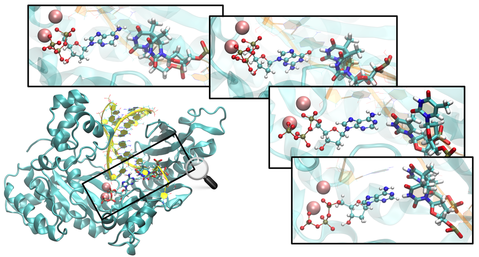 Relative Binding Affinities of Adenine and Guanine to Damaged and Undamaged DNA in Human DNA Polymerase η: Clues for Fidelity and Overall Efficiency
Human DNA polymerase η (Pol η) plays an essential protective role against skin cancer caused by cyclobutane thymine-thymine dimers (TTDs), a frequent form of DNA damage arising from exposure to the sun. This enzyme rescues stalled replication forks at the TTDs by inserting bases opposite these DNA defects.  Herein we calculate binding free energies for a free deoxyribose nucleotide triphosphate, dATP or dGTP, to Pol η complexed with undamaged or damaged DNA. The calculations indicate that the binding of dATP to the enzyme-DNA complex is thermodynamically favored for TTD-containing DNA over undamaged DNA, most likely because of more extensive hydrogen-bonding interactions between the TTD and the enzyme that hold the TTD more rigidly in place.  The calculations also illustrate that dATP binding is thermodynamically favored over dGTP binding at both thymine positions of the TTD, most likely due to more persistent and stable hydrogen-bonding interactions between the TTD and dATP than between the TTD and dGTP.  This free energy difference is slightly greater for binding at the 5’ thymine position than at the 3’ thymine position, presumably because of stabilization arising from the A:T base pair formed at the 3’ position of the TTD in the previous step of Pol η function. All of these trends in binding free energies are consistent with experimental measurements of binding strength, fidelity, processivity, and overall efficiency. The insights gained from this analysis have implications for drug design efforts aimed at modifying the binding properties of this enzyme for improving cancer chemotherapy treatments.
DOI: 10.1021/jacs.5b08451 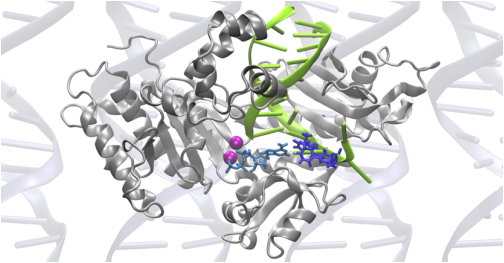 Comparative Molecular Dynamics Studies of Human DNA Polymerase η
High-energy ultraviolet radiation damages DNA through the formation of cyclobutane pyrimidine dimers, which stall replication. When the lesion is a thymine-thymine dimer (TTD), human DNA polymerase η (Pol η) assists in resuming the replication process by inserting nucleotides opposite the damaged site. We performed extensive molecular dynamics (MD) simulations to investigate the structural and dynamical effects of four different Pol η complexes with or without a TTD and with either dATP or dGTP as the incoming base. No major differences in the overall structures and equilibrium dynamics were detected among the four systems, suggesting that the specificity of this enzyme is due predominantly to differences in local interactions in the binding regions. Analysis of the hydrogen-bonding interactions between the enzyme and the DNA and dNTP provided molecular-level insights. Specifically, the TTD was observed to engage in more hydrogen-bonding interactions with the enzyme than its undamaged counterpart of two normal thymines. The resulting greater rigidity and specific orientation of the TTD are consistent with the experimental observation of higher processivity and overall efficiency at TTD sites than at analogous sites with two normal thymines.  The similarities between the systems containing dATP and dGTP are consistent with the experimental observation of relatively low fidelity with respect to the incoming base. Moreover, Q38 and R61, two strictly conserved amino acids across the Pol η family, were found to exhibit persistent hydrogen-bonding interactions with the TTD and cation-p interactions with the free base, respectively. Thus, these simulations provide molecular level insights into the basis for the selectivity and efficiency of this enzyme, as well as the roles of the two most strictly conserved residues.
DOI: 10.1021/acs.jcim.5b00606
Powered by